“Twelve minus three is eleven.”

Said during a game of Eclipse. She was so convinced, I felt like I was the insane one for a few seconds.

Lots of amusements these past few days. I guess this is what happens when tax season is over. Much to my surprise, Eclipse keeps coming back to the table. Amara and Jessica can’t seem to overcome my leads. If only they’d agree to team up against me…but they’re too nice for that (thankfully). Jess brought her friend Matt over on Thursday, and through my trademark wheeling and dealing, I managed to handily beat everyone, partially by bottlenecking Matt and getting him to attack his former ally. The Planta are a blast to play, but probably only if they win. I think my favorite part was turning allies on each other. I was laughing well into the next morning. 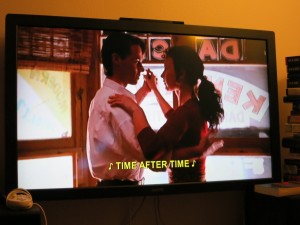 The first picture uploaded to the site. I couldn’t find a more appropriate picture for this milestone if I tried.

Mara and I watched two movies this week on Netflix: Strictly Ballroom (pictured above) on Tuesday, and The Hunger Games on Wednesday/Thursday. Strictly Ballroom was aaaaaawesome. Apparently directed by the same guy who did Moulin Rouge, which I also enjoyed. Only this time, there were 500% more Australians, and songs that now play on the easy listening radio station. Hunger Games was all around bad. The acting was the only not-horrible part about it. Watching Woody Harrelson is always a joy. At least Amara was there to give me some context from the book that the movie managed to somehow gloss over, despite being over two hours long. Movies have covered a lot more than what the Hunger Games covered, and in shorter time.

Also got to play some Dominion: Intrigue and Boggle last night when Jin came over. And some more Eclipse, Dominion, and Boggle tonight with just Amara.

Oh what a life.

Mike invited us over to his family’s house for his birthday. Great food. The main dish was steak. Too bad we’re vegetarians! He picked up three new games, only one of which he heard about before. Who does that?!

He bought Alcatraz, which we he and his friends played the night before. They said it was pretty fun, and it sounded like it was. It’s a prison break game, where you’re forced to leave one player behind as the scapegoat. We did play Room 25‘s traitor variant. It’s like a mini-Betrayal at the House on the Hill (which is the third game he bought). We had no clue what to do, and even though Mike was the hidden traitor, he only had to waste his actions rather than actively stop us to win the game. Oh, and Amara and I let a teammate walk into an Orb of Obliteration. But he could’ve been the traitor! We didn’t know! At least it was a quick death.

I sheepishly brought Resistance along, as I know Mike loves that game. I would’ve bought Avalon for his birthday if I was invited more than two days in advance :/ We played three times, and those were the worst three plays I’ve ever experienced. I tried the Lady in the Lake variant once, which the creator supposedly uses in every game. It did not fare well with the group. People didn’t seem to want to figure out who was who. Some Resistance members just went with the flow. When that happens, the Resistance loses. The other players enjoyed my table antics, at least. By the end, it became a game of Confuse Anthony.

Last night I invited Alida, Leo, Anthony, and Gabbi (GabÉ) over for six-player Eclipse! And it was just as unfun as two-player. The others enjoyed themselves, but I think that was due to the newness factor.  I played twice previously, but only with Amara. I warned them the game takes three hours. It took six. SIX. And I lost handily. Amara got pretty much wiped off the map near the midpoint of the game. By her ally, no less! I had no strategy, and felt bottlenecked. Everyone was laying the tiles out to prevent completing warp gates with their neighbors as much as possible. At least people made diplomatic ties. Can’t do that in two player.

We ended up catching the tail end of Tacoma’s first gaming convention, ConTac, and I had a blast! They had a ton of games to , plus quite a few things for sale. There were about 25 people playing at any one time. It was a very chill and much better than expected.

We got to try out Kings of Tokyo. Very disappointing, since I read nothing less than outstanding reviews. I think I just rolled shitty, and couldn’t evolve my mutant, the King Kong dude. And when I did, the evolutions weren’t as great as the others I was seeing.

Then we played some Carcassone, since Jin and Jessica have never played before. Amara got first place, and I got second. Somebody else got a distant third. It was sort of embarrassing. We played with two of the expansions. Inns and Merchants and Lakes and things. I didn’t get why they’re considered essential to the game.

At the end, I tried scoring a promo card for Spartacus. The head guy said I could have one, but then never gave it to me. 🙁 Even after buying Dominion: Intrigue. Oh, and I really wanted Prosperity, but they didn’t have it. Still should be a fun expansion.

Funny story. The seller asked where we heard about the con. I said Reddit. After a pause, he asked where. I said /r/ boardgames, Amara said /r/Tacoma. Later in the car, we realized he heard “read it”, and was asking where I read it. Saying /r/boardgames probably didn’t help us. It turned out okay in the end, though, since he gave us a flyer with a link to their meetup group at the GameMatrix store. Fun times ahead!

Other thoughts: nobody introduced themselves to us. We read Ryan’s namecard. He owned the games we played. ConTac and GameMatrix really need to hire designers and SEOs; googling for game stores doesn’t bring them up, their website is awful at a glance, and their pamphlet they gave us looks like it was created by a middle schooler with no help from his parents. And why is it every time I go buy games, the most awkward interaction I have at the store is with the cashier? Maybe it’s just coincidence. Maybe it’s just me.

Rereading everything, it’s a wonder I enjoyed myself as much as I did. I think I just like playing board games. A LOT.

According to Merriam-Webster, it means ‘rather near’.

Take that, everybody else playing Boggle with me on Sunday. Nearish is totally a word!

We went to my parents’ house for the traditional Easter brunch, which is usually the most delicious meal of the year. Usually, because this year we were all vegetarians! That didn’t stop Mom from making bacon, ham, AND sausage, despite saying she’d only make the ham.

I got to play cribbage with Dad, only losing two out of three. One game I was one point away from being skunked. Then Louis and we played some Boggle. Love me some Boggle.

The thing is, Amara and I were the only guests to show up! So there was only us, Louis, and my parents. Unheard of. Oh wait! Phyllis and Jay and their grandson stopped by for half an hour. They left after Jay lost twice, one being a skunk.

Went home, played some Boggle on the roof (70 degree day!), played Dominion with Jessica and Jin, and watched them eat Chinese food. We visited Amara’s parents at night. They’re funny people. I noticed while listening to them speak Khmer that I actually missed hearing it.

It was a full day.

We played four games of Dominion last night. So fun we missed out on running at the Y :/

Vince is visiting for a week, so I invited him and Louis over for dinner. Jess came over as well. We got to play Pandemic, and against all odds (and mismanaging the setup) we beat hard mode with four players! The board was covered in dice by the end, but we squeaked by, if only just barely.

Then came the Resistance games. MVP: Louis. For flubbing the first game as spy, being my spy teammate in the second game and winning, and then being convinced me and Jess were Resistance members in the third game, when we were in actuality the spies. In case you were wondering, that was three wins for me! Booya.

In the five player game, you have to have two missions of two players each. In separate games, I went head to head with Resistance members as a spy, and twice I failed the mission. So they were 100% sure I was spy. You would think it would be over for me, but I yelled louder than anyone else, and successfully convinced the rest of the group that they were the spy. Can’t believe that worked. Poor Jess and Amara.

Then we played Bang!, the western hidden role game. Vince the Sheriff managed to blow himself up with the dynamite that he played, dieing first and securing an easy win for the outlaws. Thems the breaks I guess.

That night, I dreamt that we were still playing Resistance. It was a very unfulfilling sleep.